We all know the face. No, not just the face, but that face. That look that she swears is not a look. She says she’s not angry; she reassures you she’s having fun. But her face has been “throwing shade” all night – without saying anything, that face is indicating that she is not happy; more than not happy, she’s about to make your night miserable too. There are plenty of memes, jokes, and videos, much like this one, which make light of that face, which in 2015 has become better known as “Resting B---- Face” (RBF).

Some argue that the term itself is misogynistic1. Others argue that it’s a misinterpretation of something innocuous, like social anxiety. Although both make strong arguments, one could spend longer than this blog to discuss all possible root causes. But the root causes may not even matter, as that face continues to stare at us, haunt us, and make us second guess our every decision when it’s pointed in our direction. RBF. We recognize it in celebrities, on the streets, and even in our own family. No currently celebrity has received as much ridicule for RBF as poor Kristen Stewart, who (perhaps undeservingly) has become the poster child for such an affliction. But way beyond the cultural norms and cruel jokes, we have to ask: is there something more to RBF? What is the reason that we all react to that face so negatively?

The answer may lie in our brains, which have evolved the fusiform face gyrus, an area that specializes in recognizing faces2, as well specific regions of the right parietal cortex that are specifically activated when analyzing facial expressions3. Pioneering work from legends in the field of psychology, particularly Paul Ekman4 and some of his colleagues, have contributed a vast understanding of faces and how our brain recognizes them. With current technology, scientists can go one step further in their research and automate facial expression classification using the most sophisticated technology on the market today. This technology, called FaceReader5, is capable of reading over five hundred points on the face to determine the emotional expressions of the six ‘basic’ emotions: happy, angry, sad, scared, surprised, and disgusted. These emotions are displayed by all people, across all races, genders, and ages. Since these ‘basic’ emotions were identified over 50 years ago, researchers have added additional universally-displayed emotions to the list. One of these later additions remains something of an enigma; not treated as a universal expression until the 1990s, the emotion of contempt elicits strong debate.

While on the same continuum as anger, the philosopher Robert C. Solomon6 and others, such as researcherJohn Gottman, treat contempt differently – it’s more a blend of anger and sadness directed at those deemed below you. Contempt is maladaptive in that it is particularly toxic when it develops between people in a relationship7. While contempt can be displayed for a variety of reasons, it’s easily recognized due to its curious facial phenotype: lips and brow not quite angry or sad, the lip tightened and raised more strongly on one side than the other. But in regards to this article: why is contempt included in a discussion on RBF?

Recently, consultants at Noldus Information Technology (Leesburg, VA) ran a series of videos and images through FaceReader to determine whether RBF has a facial phenotype. Images were taken from a Google search, focusing on celebrities (such as Kristen Stewart), as well as others like Kanye West and Queen Elizabeth, and the video mentioned above. All faces in the images were verified across social media as displaying true RBF. Both static images and running videos were processed through FaceReader 6.1, one of the most sophisticated tools for automatically measuring facial emotional expression. What emerged rather quickly was that across faces the amount of anger, sadness, and fear displayed were highly variable…but to the surprise of the research team, one emotion continued to rear its ugly head: the dreaded contempt. As shown in Figure 1, contempt measures very low on 10 “normal” faces, only accounting for approximately 3% of the overall emotional expression. On 10 faces displaying RBF, however, the percentage of contempt is significantly higher, almost doubling to 5.76% of the total emotion. 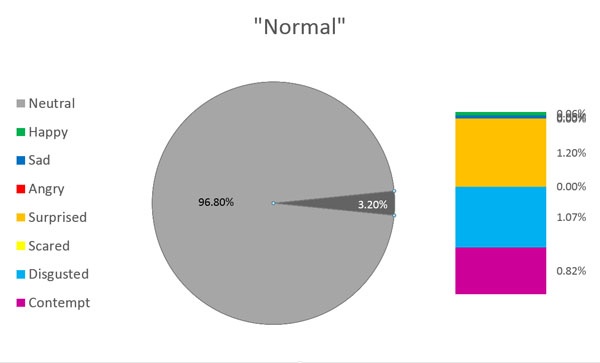 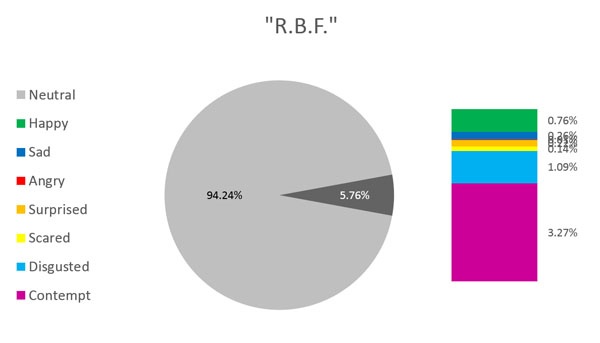 This is a fundamental and key point. FaceReader is not detecting enough contempt to reflect true contempt, because these faces are not actually displaying contempt. It just looks like contempt to the viewer. Thus, it is the perception of that unconscious, subtle contempt expression that defines RBF. Although that face may not be intentional, the viewer’s brain is wired to analyze, and recognize, when a face is displaying even minute traces of contempt. Because contempt is based upon elements of comparison and judgment, viewing this in someone’s face creates a feeling of uneasiness, or uncomfortableness, for the person viewing that face. Look at Figure 2, which shows an example from another (perhaps deserving) RBF celebrity: Kanye West. While we wouldn’t say Kanye is showing anger, or disgust, or any other “negative” emotion we know that he isn’t simply ‘neutral’ either. Indeed, FaceReader registers those minute amounts of contempt that are simply not present in non-RBF ‘neutral’ faces.

Need further convincing? Take a look at Figure 3, showing some additional faces; note the spikes in contempt that FaceReader detects in these faces! 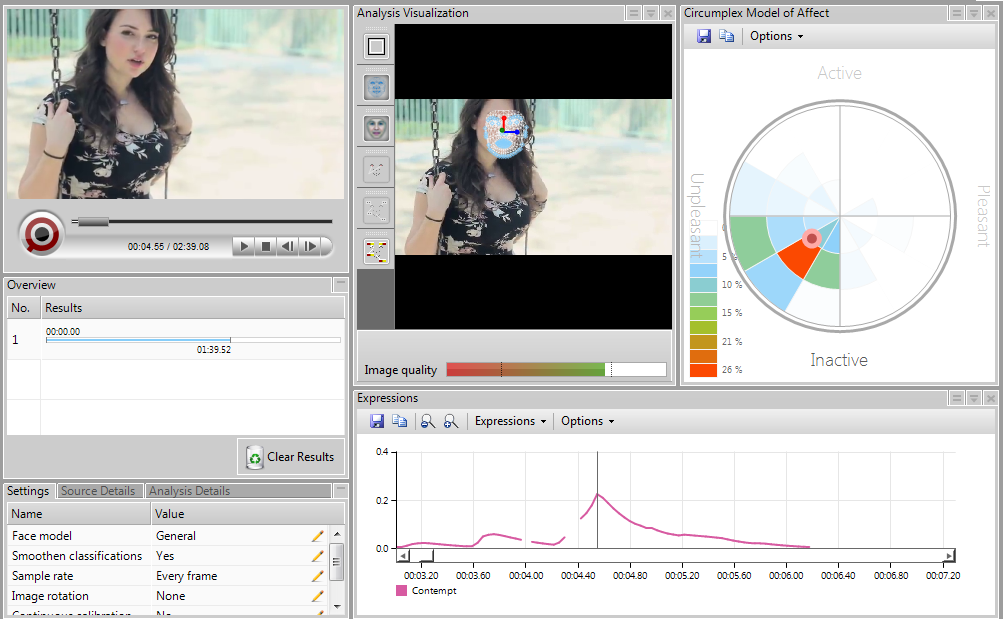 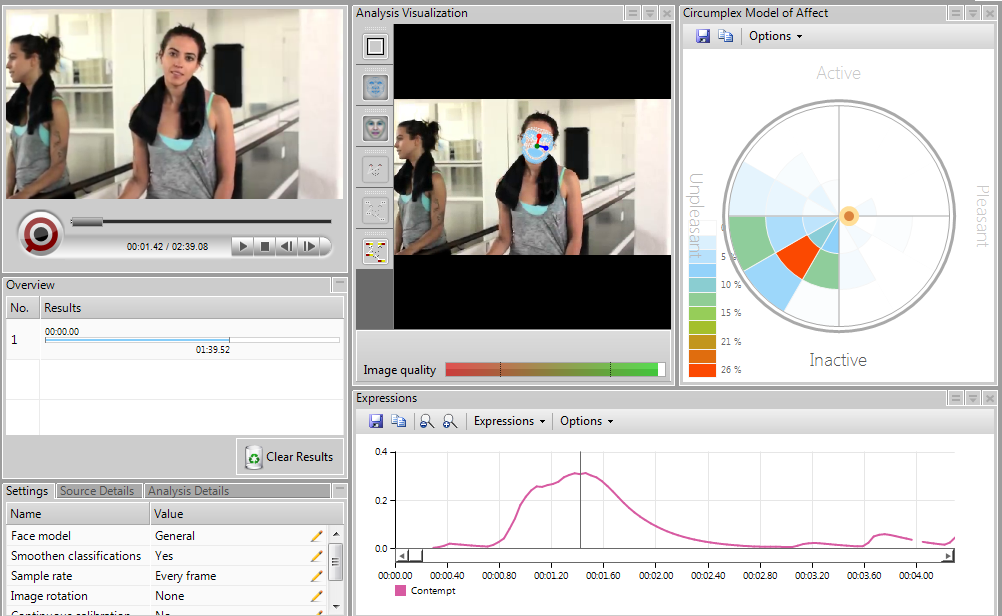 Think you or a loved one may have RBF? Test yourself!

Not to promote something we won’t do ourselves, our author Abbe Macbeth allowed herself to be used as an example of how contempt does not register on a neutral face without RBF; she’s never been described as having that look when just neutral! In Fig 4 you can see her example – the difference between this neutral and Fig 2 and 3 is quite clear: the spikes in contempt that are observed in RBF are no longer present.

After analyzing your photo you just continue to defend: “See, I’m just thinking! I don’t have RBF!!!”.! 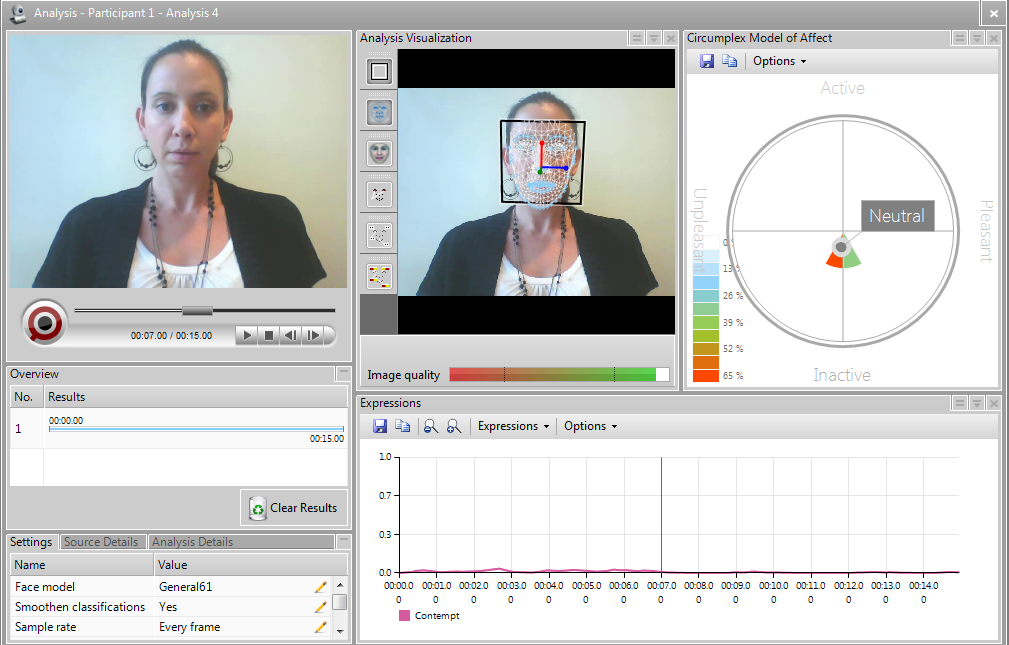